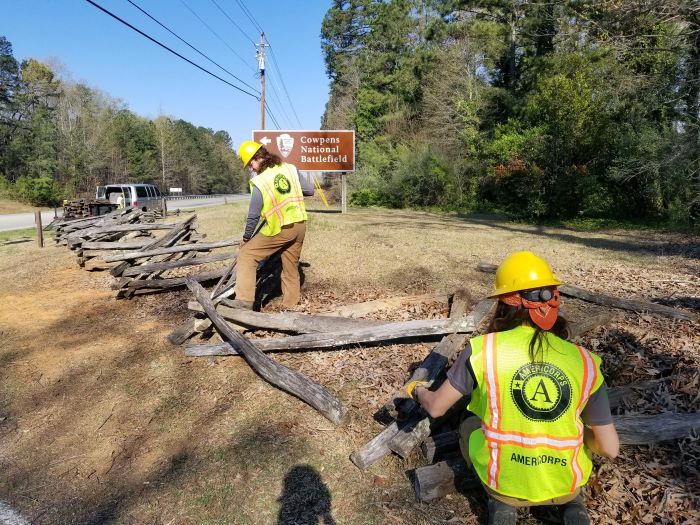 April 13, 2019 | There are wild turkeys calling. In the predawn light we can here their throaty voices, floating to us over the tall, misty grasses of Cowpens National Battlefield in South Carolina. It is the third hitch and spring has finally begun to show it's colors. Green is pressing itself from the ends of tree branches. Moisture is so thick in the air it can be seen. Sweet gum trees have dropped their bristled brown fruit across the ground. The keys of the red maple trees are brilliantly colored, quivering in the air. The invasive wisteria plants are bursting into purple bunches, beautiful to look at, but strangling native trees.

The drive from Chattanooga, Tennessee to Cowpens National Battlefield took nearly 6 hours, but we arrived to beautiful South Carolina weather and a hearty greeting from our project partner. We set up our camp under willow oak trees and enjoyed the fact that the weather was changing, that we no longer needed to wear heavy coats and gloves. The sun felt new and fresh.

We began the hitch by working to tear down and replace split-rail fencing. The split-rail fencing was made of twisting black locust wood. We stacked the wood, 4 pieces of wood high. Then we drilled hole and drove nails into the joints where the wood met. In addition to working on the fence, we were also able to pick up several miles worth of trash around Cowpens. And, near the end of the hitch we worked on the Cowpens nature trail. We created a series of check-steps using healthy logs we found in the forest and crushed quartz. These steps would guide the movement of water on the trail and help prevent erosion. We also rerouted a portion of trail and created a new drain to make the trail more durable and long-lasting.

While at Cowpens we were also able to take time to learn about the battle that had taken place there and what it had meant for the American Colonial forces during the Revolutionary War. We walked the historic trail, surrounded by blooming dogwood trees and stalks of cane. We talked of history and ghosts. The Battle at Cowpens was a turning point in the American reconquest of South Carolina from the British.

Though met with various obstacles during the hitch, including broken drill bits and severe thunderstorms that thrashed our small campsite, we were able to have an enjoyable and productive hitch, accomplishing the projects we had set out to do. We completed the new fences, picked up dozens of bags full of trash, improved the nature trail, and grew as leaders, as a community of people, and as individuals.

As we left Cowpens, we felt proud of the work we had done. We said our goodbyes and the wild turkeys splayed their feathers and called. Gobble, Gobble.