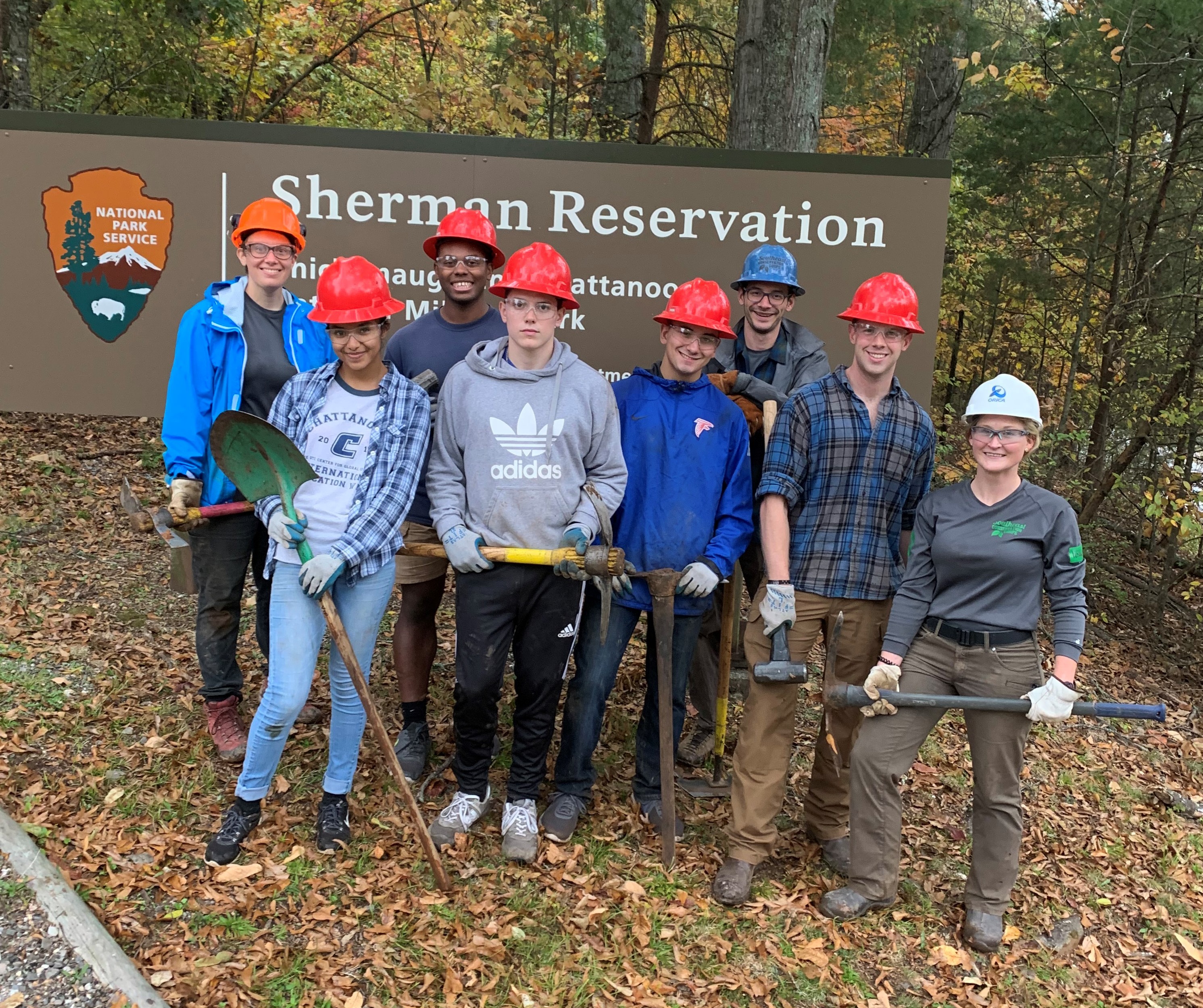 Winter seemed to prematurely descend upon the South this year, but the chill in the air didn’t stop people from joining us at various locales in Chickamauga and Chattanooga National Military Park for the final two volunteer events of our internship. Volunteers bundled up in their heavy jackets and woolen hats - not to mention their PPE, of course! - and brave the trails within Chickamauga and Chattanooga National Military Park for some good, old-fashioned, hands-on trail work.

Saturday, November 2nd, arrived quicker than expected after a long planning process. That morning, we hiked several trails on Lookout Mountain to install signs for the Great Eastern Trail (GET) that partially runs through this part of the park. The GET is the United States’ newest long-distance trail; running from the southern Appalchians in Alabama and ending at the junction with the Finger Lakes Trail in western New York, the GET will ultimately span 9 states and run 1,800 miles, connecting pre-existing trails together. We stood by our trusty NPS truck at the Cravens House parking lot, feeling self-conscious in our down winter coats as trail runners whizzed by in shorts and spandex, waiting for any volunteers who may show up. Matt Cottam joined us, followed by two volunteers, and we gave our safety and information brief, handed out PPE, and headed out on the trails.

Despite the sullen dampness, the volunteers stayed in good spirits and mustered all their might against our power drill to make holes in the park’s stubborn metal posts. Drilling the posts and affixing the GET signs to them required two to three people, and everyone worked together to make some considerable progress that day: we installed 7 signs during our 2.5-mile one-way hike, adding signs to the Cravens House Trail, Rifle Pits Trail, and Guild Trail, the latter of which is owned and maintained by the nonprofit Lookout Mountain Conservancy. We covered about half of the length of the Great Eastern Trail on Lookout Mountain, which was our goal for that morning. Several trail runners and couples walking their dogs (leashed, of course!) stopped to ask us what we were doing and to thank us for working on the trails, which motivated us to keep on working through the cold morning. Matt even scored a gorgeous bunch of wild Chicken-of-the-Woods mushrooms, which we all took as a good omen for our success that day!

Even prior to the planning for our GET volunteer event, we began planning for our fourth and final project. At the end of August, Volunteer Coordinator and Interpretive Ranger Will Wilson informed us that the gravel steps at Sherman Reservation on Missionary Ridge are in need of major repairs. After talking it over with Matt and Donny Campbell, Chief of Facilities and our supervisor at the park, we decided we would take on this challenge as a step-up (pun intended!) from our corridor-clearing volunteer events in the past.

We pitched the idea of hosting this project as a volunteer event for UTC’s ROTC cadets to Major Kevin Beavers, the Department Head of the Military Science Program, the first week in September. Major Beavers responded with interest, and all parties involved in this planning process replied in kind. This was the first time that UTC’s ROTC program would be participating in an event at the park and working with SECC, and we were especially excited to use the brawn and goal-oriented mentality of the cadets for a major project. This large task ahead of us required several visits to Sherman Reservation, major planning, and a lot of communication!

After about a month-and-a-half of planning, the project changed from repairing the gravel steps to ultimately mitigating the water drainage issues on the 0.2-mile-long path above the steps, and after a raincheck on our first attempt, we finally set our project date for the afternoon of November 7th, just 5 days after the GET sign volunteer event. Mother Nature taunted us again on our volunteer day with spotty rains throughout the morning, but we were determined to push through. We loaded up the 8-foot-long wood timbers, digging tools, water, and PPE in our NPS work truck and made our way to Sherman Reservation. Soon after, Major Beavers pulled up in a white van and out bounded 5 cadets who were ready to get to work.

The cadets gathered around the gear laid out at the work site, and we quickly highlighted the history of Sherman Reservation and conducted a safety brief before handing out PPE. Once again, the clouds reminded us of their presence and steadily rained on our helmets as we headed up the trail with tools in-hand. Thankfully, we were under tree cover and the rain subsided shortly after. Matt and the two of us divided the cadets and Major Beavers into three groups, and we then placed ourselves in the locations on the trail where the water bars would be installed.

Each group began by clearing the duff and debris from the trail and etching a line in the dirt with a digging tool that would become the drain for the 8-foot water bar. Each team of cadets grabbed a timber from the truck and carried it back on their shoulders to their work site, and then began the process of digging a drain for their water bar. After ensuring a suitable fit for the timbers in the drains and driving rebar stakes through them with double jacks, the drainage ditches were ready to be dug on the upslope side of the water bars; competitive banter among cadets thus ensued. Two particular cadets from a group began jokingly trash-talking the other two groups, bragging about how they were going to make the best-looking drain. This sparked a healthy competition among the groups to work a little harder and a little more diligently, not the cadets needed to be prompted to do so. Each team chiseled a beautiful rolling drain dip with all of the necessary components, including a gorgeous low-point, an attractive banking curve to contain the flow of water, and a knockout end point to effectively deposit the drainage off-trail. We couldn’t pick a favorite, as all of the water bars and drains were well-constructed in their own individual ways!

Once each group completed their water bar, we headed back down the trail and returned the PPE gear and tools to the work truck. Looking back at the work that we just completed, we believe that the cadets were pleased with what they accomplished, and we certainly were, too. In about 3 hours, we installed 3 water bars and drains on the trail at Sherman Reservation. Ultimately, the water bars will help alleviate the erosion issues further downtrail on the gravel steps, and their installation now allows for the gravel steps to be repaired. This was the most difficult, but most rewarding project to end our volunteer events on. We had to recall knowledge and skills from our own training in July installing drains on the Gum Springs Trail on Lookout Mountain. Constructing a water drainage feature ourselves, let alone leading a crew to construct one, is something that we never dreamed of doing at the start of our internship!

Organizing and executing these volunteer projects requires a lot of work, but the projects are beneficial in so many ways: areas of the park are being repaired and maintained; relationships are being built between the park and the people in the surrounding communities; and, as interns, we gain leadership and organizational skills that we can carry to any future workplace.

We’d like to thank our volunteers that participated in these events; we could not have done this without you, and thank you for contributing to the National Park that is in your community. We’d also like to thank the National Park Foundation for providing a grant for our program through the generous support of Nissan TITAN, Nature Valley, and REI Co-op.