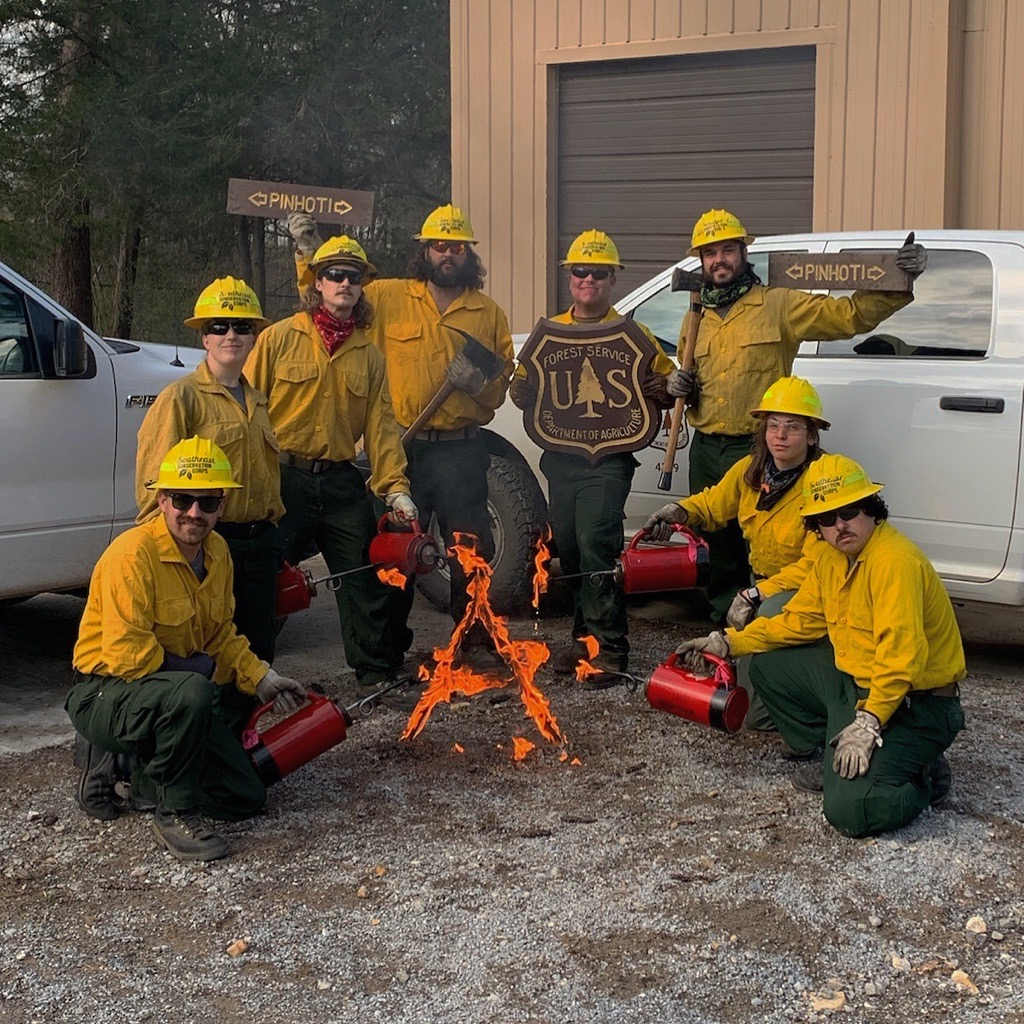 Picture this: Bienville National Forest, in the sweet, sweet south, Mississippi. The weather: a low temperature, low humidity. A beautiful window to put some fire on the ground and burn the acres Crew 962 has desperately been waiting to ignite. Our drip torches have been seated in the back of the two Forest Service trucks, itching to be ignited and poured onto susceptible fuels. All while the crew has been initiating conversations for the last two months of “Will we ever see real fire?” or “I’ll believe it when I see it!” The time has finally arrived.

We arrive to the Bienville work center to be briefed, and shortly thereafter leave to head to the burn unit. The anticipation is there, the stomach flutters of nerves, and unspoken excitement from the crew. We have a plan, all that is left is to execute. Alpha squad arrives to their post, with a short three-mile hike to the farthest point. Bravo squad then drives farther down the road, to get to their hike-in point. The plan is to use an UTV assist, to create a black line to prevent the fire from escaping the burn unit. We are just there to assist in making sure the black line, is cold, hard, and black all the way through.

The beginning of the burn was slow on the north side of the burn unit. The south side had a bit more action early in the day. The fire behavior was working in our favor, not sending smoke to the wrong side of the line, and pulling into the burn unit, rather than out. Flame height was low, and the fire was moving exactly where we needed it to.

Fast forward to the end of the day. Alpha Squad had a small area left to close. During the afternoon, our UTV got stuck in knee-deep mud. That means hand-lighting for the rest of the squad. The members were running low on burn mix, while I had half a torch left. The pressure was on to finish the line, to move out and finish the day. One member ran to the UTV to get a refill on burn mix in his torch. I communicated with him over the radio, “I’ve got it, just stay where you are, we will meet up and hike out together.”

Lucky for myself, this portion of the burn unit was extremely susceptible. Pine litter, and very highly volatile bushes that were just waiting patiently to light up the forest floor. I switched methods from a solid line to dot firing. As I was walking back, the adrenaline was pumping, and the fire was catching. I got to the next person on the line and was pleased that the job had been finished. I then realized, that somewhere down the line, my water bottle fell off my backpack, and was just sitting on the line somewhere.

No bottle left behind! I immediately dropped my gear and made a run for it to retrieve my Nalgene. As I was running, it felt as if I was running through a movie. To the right of me, completely peaceful forest, to the left of me: a forest engulfed in flames. Thirty-foot flames, catching bushes on fire, and sending fire 20-30 feet up through a pine stand. There was a time crunch, we had to head out to meet up with the other squad. That didn’t stop me from making sure I hadn’t started a wild forest fire that was out of control, while also taking in how amazing it truly was.

I find my water bottle, and quickly make my way back to the other crew members. I have so much adrenaline from what I just witnessed; I can’t stop talking about it. The fire has died down, and the stress of danger to that burn unit ceased. Our job is done, the day is done, and that "firebug" all the seasoned firefighters talk about is very real.