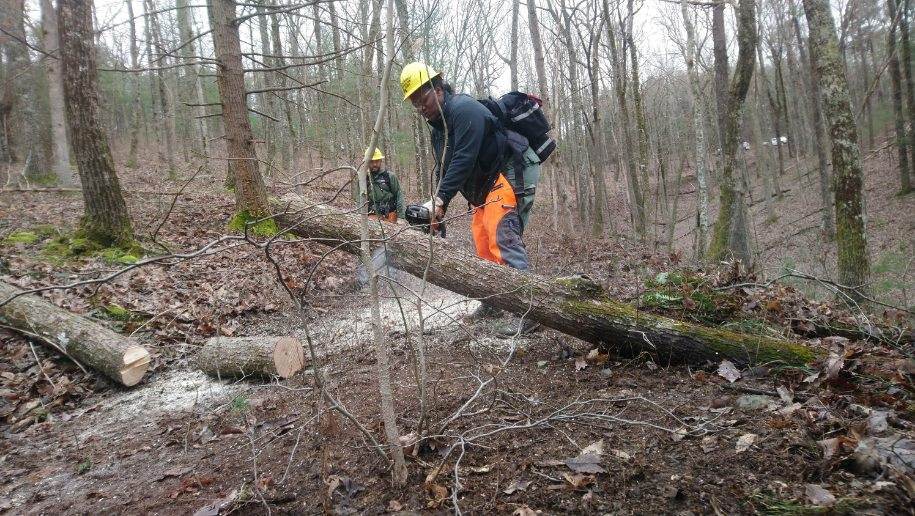 Have you ever done something new? Were you scared? Well, I have, and I was. It all began when I decided to apply for the Veterans Fire Crew program kick started by the Southeast Conservation Corps.  We started January 14th and I must say with the government shut down it has been quite a ride. My first impressions have been great, everybody has been super kind, open and more relatable than I had originally anticipated. On the first day, we all sat together in the regional office introduced ourselves and I felt right at home to be honest. It felt like a more liberal military (really liberal), my new fellow crew members assured me that they would help me as much as possible because I had zero outdoors experience coming into this establishment. I laugh now because it’s not so bad, and I have plenty of help and guidance from them but boy was I overwhelmed in the beginning. I mean, not that it matters but I am the only women, and my crew members were well rounded in the outdoors arena.

Anyways, like many other jobs, our leadership briefed us on the “In’s and Out’s” of how the next ten months would go, the history of conversation corps, and of course policy and regulations. Now, all of this may sound boring, and repetitive but it was actually informative and funny. I laughed more than I had in a while and realized there was a world that I had been missing out on. As I mentioned earlier, we got a rough start to our Journey due to the government shut down, the the forestry services in which we would be collaborating with was closed for days on end. So, the organization quickly put us to task with some conservation work. We had plenty of time to engage in different facets of the conservation business. I spent my first few days marking boundaries for a neighboring organization. I can’t remember the name of that organization but one of their main purposes is to research and try to preserve certain species of birds. A member of that organization spoke passionately about birds and that passion intrigued me and made me feel at ease. In my experience so far, most conservation personnel care deeply about the environment, and it’s really new to me because the neighborhood I come from simply does not have the resources. All and all, I got close to the river bank (I love water) and got well acquainted with bush whacking, and different terrains. I realized then, I need to work out more, this job can be physical.

I must say though, this type of work is quite rewarding if you really ponder on how you’re contributing to the upkeep of these Americans lands. Anyways, after we marked boundaries, we visited a local arboretum and rehabilitated an old trail/staircase. Children visit throughout the year, and we made it much safer for them to use the staircase and redirected the water, so their walk was a little less muddy on rainy days. It felt good to impact the local community, and we also got a nice tour of the place which included a visit to the rare red wolves the facility maintains.  That next day, we got news of our first hitch. Now I’m no expert but in conservation terms that’s short for we’re going camping. Which leads me to our next task. I say this with a deep sigh, “Invasive species removal”. This particular part of conservation has tested my patience for the rest of the year. Specifically, a little tree from China known as privet. I probably cut and sprayed 1000 or more little privet trees but we all did it together and laughed and joked about it when the work day was over. We removed almost 3 acres of this destructive species of trees at a park in Athens, Ga. So if you’re familiar and pay a visit to Dudley park, my crew and I have been apart of removing the brush, and now you can see threw to the creek when you enter from the main parking area. I’d say that that camping trip allowed us to get to know each other better. I’m also happy with the delay in training because we have grown as a unit by working together on task unrelated to fire. I got a good feel for how we worked together, and I wouldn’t go back and change anything.

Towards the end of our hitch (and several well-deserved days off), we got the news that the government had reopened. I was ecstatic because it meant I was closer to being trained to fight fires and saw down trees alike. We are now currently stationed at our work place in Villanow, GA and prepping fire lines for prescribed burns coming up. We’ve been issued the coolest gear, and things are really starting to pick up. I feel like I’m apart of this really exclusive club and when I’m done, I’ll be able to benefit others with the experiences I’m having now. I’m looking forward to starting the class portion of this program, and then getting out on a fire. I don’t know what that’s like yet, but I hear its addictive, and I’m ready to get to work. Everything and everyone have its place in this world. My current place in this world is this uncharted territory, with these new experiences, and theses fears that I’m facing. I’ve already learned so much.