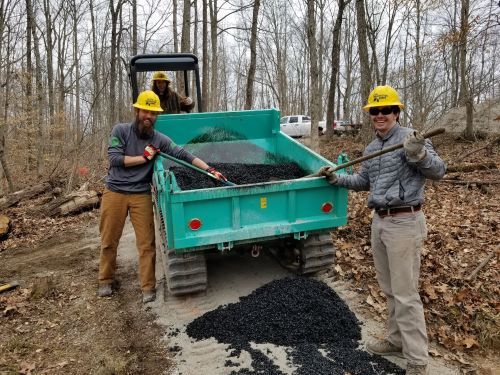 March 14, 2019 | Where to begin… I guess at the beginning – a little after 7am in a chilly parking lot with a bunch of people you’re only barely starting to get to know.  As crews scramble to load their tools and supplies, sub-freezing temperatures may have numbed your fingers and toes, but they do nothing to slow the thoughts bouncing around in your head – Where are we going again?  Did I remember toothpaste?  I should have gotten here earlier.  What was her name?  Is it going to get any warmer?  Does this go in the trailer or the van? Hopefully everyone likes my dinner.  This is gonna be fun.  I’m nervous.  I’m excited.   Can I do this?  I can do this.  I’m fine.  Everything is fine.

Then all of a sudden you’re in the van, pulling away from the office.  The bustle of the parking lot and the shop has ceased and now it’s just you and your crew.  The training trip from the previous week has everyone well acquainted enough to share in a little excited banter, maybe an inside joke or two, but this isn’t training any more.  You’re on your way to a real project for the next nine days, where you will live and work with seven people you’ve known for about a week.  And more than that, you’ll be expected to do it five more times over the course of the next few months, sharing your stories, your jokes, your flaws, your successes and failures, your lives.  And right now, riding in the van on the first morning of the first hitch, you’re hoping that all works out.

Luckily for us on team Big Corn (crew name subject to revisal), things seem to have started off about as well as we could have hoped.  Our first hitch took us about 3.5 hours north, to the beautiful Daniel Boone National Forrest in the area of London, KY.  A huge shout-out is owed to our hosts/project partners at the Forrest Service, who, due to a few flooding issues, were forced to improvise a bit with our work plans.  Despite those challenges, they were able to put together a great week of work for us, and were there along side us to lend a hand and show us the ropes.  When a particularly bad stormed rolled in mid-week, they even found us a place to stay in a local church (along with a spaghetti dinner, seriously thank you so much).  Really a pleasant bunch of folks.

The project work took us to the Flatwoods picnic area overlooking Laurel River Lake.  Several of the picnic sites were set to be closed, and those remaining open were in dire need of some revitalization.  That’s where we came in.  It was definitely an interesting first day; not only was it our first time working together as a crew, but we were getting a crash course in laying gravel and cold pack and everyone was trying out everyone role to see how they fit in.  That meant clearing trail, digging drains, shoveling and raking and smoothing, driving the IHI (big dumber thing), manning the mechanical tamper.  Naturally there was a bit of a learning curve, but by day two everyone was settling in nicely.  All in all we revamped five picnic spots with new gravel, resurfaced trails, and brand spankin new tables, all while mixing in some road sign replacement, campground rehab, and 39 bags (yikes!) of trash pickup.  Our big end of week project was resurfacing about 300ft at the start of the Flatwoods Peninsula hiking trail.  Not a bad start to the season.

But learning to work together was only half the battle.  At the end of a long day of work, when a hot shower, a cold beverage, and a couch sounded a lot like heaven, we made our way up the road to camp, which over time became our home in its own special way.  I will say, there is not a better way to grow comfortable around a group of strangers than to spend nine days in the woods with them.  Any shyness from the start of the hitch had a hard time surviving those close quarters, as we shared a bit of our stories, our hopes and fears, many many laughs, and the collective stink of people who work their asses off without showering.  Obviously you can’t learn everything there is to know about people in nine days, but I think everyone would agree we made some progress and managed to have a pretty good time while we were at it.

When it comes down to it, my biggest take away from Hitch #1 can best be described as a feeling of accomplishment.  At the end of the trip we could stand back and look at the things we had done - bags of trash removed, new tables, new, clean pathways, new signs, etc. - and know that our mark would be there for years to come.  People will be using our work, probably with little knowledge of the labor that has gone into it, but still there appreciating it.  I guess that means something to me, and I’m the one writing the blog, so today at least, it’s important.  Getting out there and, even though the days are long and the work is tough, feeling like it’s important.  Like at the end of the day you accomplished something worthwhile.  Like today you made a little bit of a difference.  It’s a good feeling.